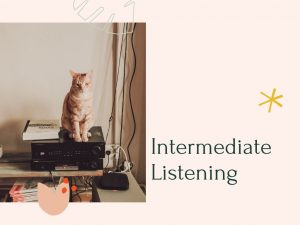 I highly recommend the free video clips and recordings in the Korean Lessons+ iPhone app. You can find them under the sections Shows and 이야기. In these recordings native Koreans share what happens in their daily lives so you get to learn more about Korean culture and living too. They are of the right level of difficulty for intermediate learners. The best thing is that they have full PDF transcript for the conversations found under 이야기 for easy reference. 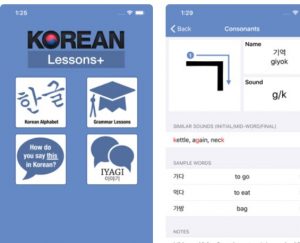 Unfortunately for those of you using Android phones and do not otherwise have an Apple product that can download the app, this app is only available in iOS. Alternatively there are a lot of good videos in the Talk To Me In Korean Youtube channel as well, especially playlists Listening in Slow Korean, Korean Dictation Tests and Conversations in 100% Korean.

Obviously, you can continue to watch whatever TV dramas and variety shows that you love. You may be able to make out some short sentences, but not a lot. However you can get familiar with native Koreans intonation and cultivate a general sense of the language.

Another good source of intermediate listening exercise is children’s stories with Korean subtitles.

Simply search for 동화 or 어린이 이야기, you will get a lot of results from the YouTube and elsewhere in the internet. One popular YouTube channel playlist of children’s stories produced by the maker of Baby Shark can be found here.

When watching your favorite drama or listening to K-pop songs, do you realise sometimes Korean words are pronounced quite differently from their spelling?

This is because of the various sound change rules. The rules did not start out as rules per se but over time people change the sound for ease of pronunciation. Take one example – 같이 is pronounced as 가치 but not 가티. This is similar to in English ‘Would you’ is pronounced as ‘Would chu’ due to the ending d in the previous word. However in Korean it is more formalized that even dictionary pronunciation follows these sound change rules rigorously. Therefore starting at intermediate level it is quite crucial to familiarize yourself with sound change rules, not only to better understand spoken Korean, but also to pronounce Korean properly.
For example:
좋겠어요 is pronounced as 좋켔어요 while
죽겠어요 is pronounced as 죽껬어요.
Note the marked difference in the first consonant of 겠. Apart from the vowel of 좋 and 죽, this consonant is also key in differentiating these two phrases which mean opposite things.

There are a fair number of these rules and at first they may seem daunting. I would suggest to remember a most commonly used example for each of these rules, and make a mental note to yourself every time you come across it listening to natives speak. Try to pronounce those words yourself, you will realise why they apply those rules is because it makes the pronunciation easier and smoother, and hence it will come naturally over time with practice in listening and speaking. See here for a full list of Korean sound change rules together with a one-pager PDF summary / cheatsheet. 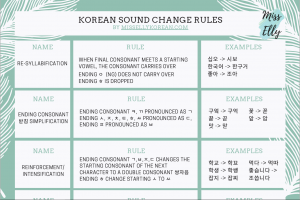