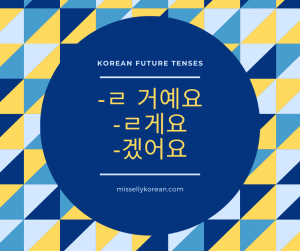 When I first learned that in Korean there are three future tense structures I was exasperated. But when you come to think of it, in English we also have ‘going to’, ‘will’ and ‘shall’ future tense structures. At first you just have to know that all these mean is that the action happens some time in the future is good enough. With time and more exposure, you will naturally get to know the differences between the three and when to use which structure.

The three constructs that represent future tense in Korean are:

This structure is most often used to describe things that will happen regardless of other things as a matter of fact. Using this structure means the future event will very probably happen or must happen.

Also by knowing that 거예요 is simply 것이예요, we will know that this future tense construct looks like the below in other politeness levels:
것이다 (Written narrative)
겁니다 (높임말)
기야 (반말)
You may be confused by why there is a space before 거예요 but no space before 게요 (뛰어쓰기). It is simply because 것 in 것이에요 is a noun but 게요 is simply a grammar structure ;).

Many grammar study notes say that this structure can only be used as first-person. But why?
This is because when you use this structure it is very likely that the action you do has a direct impact on or as a direct result of the listener. There is an implicit meaning of seeking the other person’s comment on your action. Therefore this structure is used most often in daily conversations.

A: 도와드릴 거예요. (X)
B: 괜찮아요. 제가 할 거예요. (X) Both sounds unnatural as it basically means I will help you regardless of what / whether you want me to / as a matter of fact.

Another example –
A: 민수 씨, 언제 올 거예요? Minsu, when are you coming? [-게요 can only be used as first person so 거예요 should be used here] B: 금방 갈게요. I will be there soon.

This structure can be used in a couple of specific use cases only:

다음번에는 늦지 않도록 하겠습니다. I will not be late next time.
내가 즉시 그걸 하겠어요. I will do it straight away.
앞으로도 열심히 하겠습니다. I will continue to work hard.

This is used very often when you order in a restaurant or buy something in a shop.
스테이크로 하겠어요. I’d like to have a steak.

When given certain facts or evidence, you make an assumption about what may happen or what looks like will happen, we can use 겠어요.
나 혼자서 다 못 하겠어요. (Given the amount of work, it looks like that) I can’t do all this alone.
심심해 죽겠어. I am so bored that (it looks like) I am going to die.

In Korean TV shows you hear people say 맛있겠다 all the time. What is the difference from 맛있다?
The -겠다 / -겠어요 structure means assuming that something is the case. Therefore 맛있겠다 is only used when you see someone else eat and it looks delicious. This is NEVER used if you are actually eating the food and want to say it is delicious after experiencing it first hand.

It is also often used when asking other people’s intention politely (i.e. making assumptions about what the other person wants).
도와 주시겠어요? Would you please help me?
카드로 하시겠어요? Would you like to pay by card?

Finally it can also be used when discussing theoretical situations such as ‘what would happen if…’
나 같으면 그렇게 안 하겠어요. If it were me, I wouldn’t do it that way.

I hope you find these explanations useful. I’d encourage you to practice their usage by writing three sentences with each making use of one of the above structures and leave a comment below. Happy Korean learning!

When watching your favourite drama are listening to K pop songs do you realise that sometimes Korean words are pronounced quite differently from the spelling? This is because there are…
BeginnerGrammarIntermediateReading