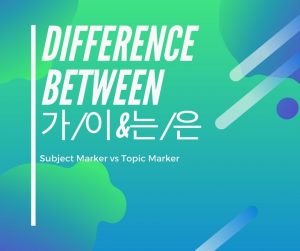 Difference between 이/가 and 은/는 and when to use them is one of the questions most often asked by beginning learners of Korean and it is one of the topics that I myself find challenging as well. If you have the same problem, the good news is that you are not alone. Even Koreans wrote thesis on this topic. There are no straightforward principles to explain the difference and it definitely cannot be explained in terms of two or three rules, but a more complex interplay of principles apply. In this post I will try to summarise these rules and principles governing the usage difference between 이/가 and 은/는. Only with time, being exposed to numerous usage examples will you finally get a more instinctive feeling of when to apply which one.

If you want to say there is a cat behind the house. The more natural way to say it will be
고양이가 집 뒤에 있다
When you’re referring to a specific instance of something, in this example a specific cat instead of cats in general, then you will use the subject marker 가/이.
By the same token, when you talk about weather, usually you will use the subject marker 가/이 because you are referring to that specific day or time.
비가 온다
날씨가 좋다
It would be weird to say it generally rains or the weather is generally good.
In contrast, when you are talking about something in general, you can use the topic marker 는/은. For example
고양이는 동물이다
Cats are animals.

Another difference between 이/가 and 은/는 is that when you are making a comparison, typically in the format of ‘A is so-and-so, as for B…’ you use the topic marker 는/은. For example if you want to compare the weather between yesterday and today.
어제 비가 왔는데 오늘은 날씨가 좋다.

Want to practice 이/가 and 은/는 usage with worksheets? Check out our PDF Marketplace!

Let’s take a look at this short conversation:
A: 누가 1등 했어?
B: 지수가 1등 했어.
A: 그렇다면 영희의 등수가 궁금한데?
B: 영희는 2등 했어.
It translates to
A: Who got the first prize?
B: Jisoo got the first prize.
A: Then I am curious about the ranking of YoungHee?
B: YoungHee’s ranking is second place.
Note that when A asks about Jisoo and B answers, The subject marker 가 is used. This is because the main subject of concern and focus is Jisoo. in the second set of question and answer, because the main subject of concern changes to YoungHee’s ranking, but not YoungHee himself, therefore when B answers, the topic marker 는 was used.

Another rule to differentiate between 이/가 and 은/는 is that if you are talking about something objective like you are describing exactly what you see or what is in a photo without adding any of your own thoughts or comments, typically subject marker 가/이 is used.
For example
길에 차가 많다
There are many cars in the street.
On the other hand, when you’re explaining your thoughts or express your comments on a topic, you would use the topic marker 는/은. for example
나쁜 사람은 적다
There aren’t many bad people.

Rule 6: Always use 이/가 after the subject of a noun phrase

By noun phrase I mean a noun together with the mini-sentence that comes before that describes the noun e.g. ‘내가 좋아하는 음식’. In this case the noun ‘음식’ is qualified by the phrase’내가 좋아하는’ as an adjective. A noun phrase can take the place of any role in a sentence like a single word noun.
If we look at a sentence containing a noun phrase – 떡볶이는 내가 좋아하는 음식 중의 하나다, the subject 내 in the noun phrase should always be followed by 이/가 but not 은/는. This is because 은/는 emphasizes what comes after and has a farther reach outside the boundaries of the noun phrase. Therefore the sentence would not read well with 은/는.
Let’s look at one more example – ✔오빠와 만날 수 있는 건 하늘이 내게 주신 가장 큰 선물이야.
Contrast the above with ✘오빠와 만날 수 있는 건 하늘은 내게 주신 가장 큰 선물이야. which makes the start and end of the noun phrase ambigious.

Rule 7: Emphasis before or after the particle

I have summarised here the comprehensive basic rules to consider when trying to differentiate between 이/가 and 은/는 when marking the subject. it is not always clear cut that which rule applies to which scenario. Sometimes multiple rules apply at the same time and conflicts do happen. These only serve as the foundation when you read and hear more how native Koreans use them. Each time you come across a usage which does not seem natural to you, trying to think which of these rules may apply in that case. If you are still feeling confused, don’t worry! Even if you say it wrong very likely Koreans can still understand what you mean. This is a continuous learning process and you will only master it in a natural or instinctive way. This is why even native Koreans cannot fully articulate the nuances of the differences when being asked.

I have put together a short exercise on 이/가 and 은/는 usage so feel free to try it out to see where you are!

Hopefully by now you have learnt something more about difference between 이/가 and 은/는! If you find this post useful, subscribe to read more of these grammar points explanation and Korean learning techniques. If you want me to talk about any specific topics feel free to leave a comment below. Have fun learning Korean!