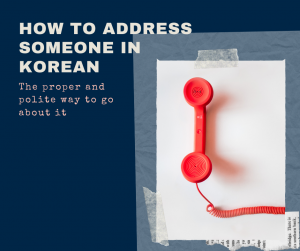 Even as a beginner learner in the Korean language, when you travel to Korea or study in Korea, you will have to know the proper way to address someone politely. There are many ways to address someone in Korean and that is why it can be confusing to learners of the language. To further complicate the problem, there is no straightforward way to say “you“ in Korean. Now let’s look at each of these expressions that you may find useful interacting with Koreans one by one.

If you are speaking to someone of a high social status such as a professor, doctor, teacher, or someone of certain occupations, you would address him or her by the name of the occupation. You will have to attach the honourifics 님to the occupation.
Teacher / medical doctor – 선생님
Professor – 교수님
Policeman – 형사님
Driver – 기사님
In a business setting, you will address someone of a higher position by the name of his position, for example team leader, manager. Sometimes you can attach his or her surname in front. Again, always attach the honorific 님at the back.
Manager – 과장님
Team leader Kim – 김 팀장님
In a restaurant, especially the small ones where someone is apparently the shop owner, you can summon him or her by calling 사장님 meaning the boss. On the other hand, the patrons or customers of a shop are called 손님 / 고객님.

By age and gender

If you don’t know the occupation of the other person, or you do not meet them in a relevant business setting, you may refer them by their age and gender, for example uncle or auntie for people in their forties or fifties. If you watch Korean drama you would have heard these expressions a lot. Though technically these are polite casual polite expressions, some people may find it offensive if called an uncle or auntie, if they consider themselves to be younger.
Uncle – 아저씨
Auntie – 아주머니 (The form commonly heard in dramas is 아줌마 which can be seen as impolite)
Miss – 아가씨
Elderly – 어르신

If you know absolutely nothing about the other person or you do not want to offend someone who does not seem to like being called an uncle or auntie, you can catch the attention of the other person by calling out 저기요. It literally means ‘hey there’ but in the polite form. It is useful to summon a waiter in a restaurant or catch the attention of a complete stranger in the street.
If you are already in a conversation with a stranger and it is absolutely necessary to say “you“ in a sentence, then you can use 그쪽, literally meaning ‘that side’. Why I say only when it is absolutely necessary to say “you“ is because in most of the cases the “you” is omitted in Korean sentences. For example, “When will you come?” in Korean is:
언제 올 거예요?
So only in very specific scenarios that “You“ must go into a sentence, such as “I am a student and you are an office worker.“
저는 학생인데 그쪽은 직장인이에요.

Though you may hear these expressions in dramas or lyrics, it is best to avoid using these with strangers or before you are completely familiar with their usage.
그대 – This is in the title of one of the most popular Korean dramas of all time – My love from the star (별에서 온 그대) However this expression is only used in the written language, most often in lyrics and poems only.
당신 – if you search for the word “you“ in Korean dictionaries, you will find this result. However this expression is only used in two very specific scenarios, other than that, it is considered to be very rude to use it. The first usage is between married couples; the second usage is when you are a very angry with someone and are practically getting into an argument.
너 – This is the “You” form used when addressing someone more junior to you and is only used between close friends and family. It is seen to be extremely impolite to be used with strangers.

Some people learned that Koreans can use the casual form (반말) people younger than oneself, then they go around using 반말 with strangers. For example, they may find out the birthday of a celebrity on the Internet, then they start using 반말 in their fan letters. In fact this is not very appropriate. For people who meet for the first time, always use the polite form 존댓말 (ends with 요). This is only with the exception of speaking to children and pets.
Once you get to know someone better, you try to establish who is older than who, then you will address each other accordingly.
There are specific expressions for a younger person calling a friend who is older than himself / herself. For the older person to call a younger friend, he or she can just say the younger persons name.

You’d probably have heard these expressions being used numerous times before in variety shows and dramas before so you should be quite familiar with them already. 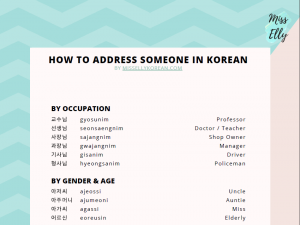 I do hope you will find these tips useful when you travel or study in Korean. Please feel free to leave a comment below if there are any topics of interest that you want me to cover. Have fun learning Korean!