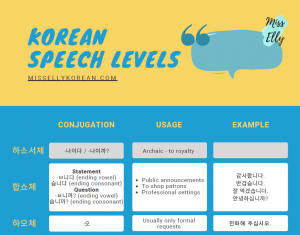 Many beginner Korean learners, especially those without politeness levels or speech levels in their native tongues, are intimidated by the Korean speech levels. There are 7 speech levels in total in Korean so it can be quite overwhelming at first. However the good news is that there are only 3 to 4 commonly used ones and there is absolutely no need to be familiar with all of them as a beginner. Stick with one level and grasp the basic grammar concepts first. Then learn the conversion between different common speech levels.

Now let’s look at the Korean speech levels one by one.

This is used for addressing royalty and is not used anymore. We can simply ignore this.

This format is frequently used especially in common phrases such as 반갑습니다 and 감사합니다. You would sound very polite using this level of speech.
It is also used in formal situations, professional settings or addressing a large group of people such as public announcements or hosting a show. When you first meet someone, 합쇼체 is the format to use for self introduction as well.
The verb conjugation is adding -ㅂ니다 if the verb ends with a vowel, or 습니다 if the verb ends with a consonant.
For interrogative (questions) form, add -ㅂ니까?/습니까? instead.
Examples include 잘 먹겠습니다. and 안녕하십니까?

This format is seldom used, except in very formal requests such as in public announcements or notices.
The most common form you would likely come across is in 십시오, which is a formal request with honorific for the person to which the request is being made.

This form conjugates with 네. This is archaic and can be ignored.

This is the prose / written form of Korean and can be found in novels, documentaries or newspaper.
Note that when used in written form or by narrator in documentaries, this has nothing to do with politeness level.
There are cases when this is used in spoken language – including when you talk to yourself or try to describe something to no one in particular. For example when you see a cat and you say ‘귀엽다!’ versus when you address the owner of the cat directly you should say ‘귀여워요’ instead.
The conjugation for verb and adjective are different. For adjectives it is simply adding 다 to the stem i.e. exactly the same as the dictionary form. For example 어렵다. 춥다. For verbs add ㄴ다 if the verb ends with a vowel, and 는다 if the verb ends with a consonant. For example 비가 온다. and 지갑을 찾는다.

This is one of the two most common form of Korean speech levels and is used as a default towards strangers.
It is used to address people senior to you / older than yourself even after you have known that person for a long time, except between core family members.
The conjugation is adding 아요 to the verb stem if the verb’s vowel is ㅗ or ㅏ . For example 가다, 오다, 받다, 살다. These become 가요, 와요, 받아요, 살아요 in this format.
For the rest of the vowels add 어요 to the verb stem instead. 먹다, 있다, 없다 will become 먹어요, 있어요 and 없어요 respectively.
One special case is 하다. It will conjugate with 여요 to give 하여요 if spelt out in full. Usually it is written and spoken as 해요 abbreviated.

해체 is what we usually call 반말, which is the most casual form of Korean speech levels.
You can use it any time with young children or pets. Many Korean learners misunderstood that you can always use 반말 with any people younger than yourself. This is incorrect.
As long as the other person is not a child, you have to ask for permission to speak casually even you knew he / she is younger than yourself. If the other person is your superior at work or has a higher social status than you, even if he / she is younger than you, 반말 should never be used at all.
The general rule of thumb is to be very cautious with usage of 반말 because this can be seen as very rude if used inappropriately.
As for the conjugation, it is simply dropping the 요 from 해요체. Therefore the above examples will become simply 가, 와, 받아, 살아, 먹어, 있어, 없어, 해 respectively.

When watching your favourite drama are listening to K pop songs do you realise that sometimes Korean words are pronounced quite differently from the spelling? This is because there are…
BeginnerIntermediateListeningSpeaking