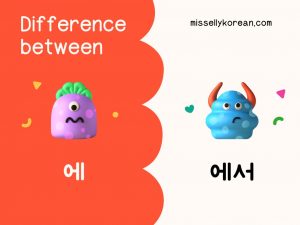 When trying to explain for the difference in usage between 에 vs 에서 with regards to describing a location, I have come across a variety of explanations across online courses and textbooks which I feel did not fully convey the exact nuance of the sense of the language. Finally I found a grammar book which aims to explain the more confusing concepts in Korean and I found one killer princple which can explain all the usage cases and exceptions which other textbooks struggle to neatly define.

First let us recap how common Korean textbooks explain the difference between 에 and 에서.

에 refers to where someone or something exists or direction of travel. 에 is usually used with action verbs or 있다 / 없다.

에서 refers to where an action takes place.

which all of you should be fairly familiar with. There are also some exceptions such as 살다 can be used with both 에 and 에서.

Now if we take a step back and try to see what is the root cause driving this difference in usage, it is much easier to remember:

With this understanding we can use the two particles much more confidently and accurately. Let’s look at some examples:

These are typical scenarios accounted for by traditional explanation –
응급실에 사람이 많아요. There are many people in the emergency room. When we talk about things exist somewhere, we think of the location as a spot.
미국에 간 적이 있어요. I have been to the US before. In describing the movement direction, location is referred to as a spot.

These are ‘exceptions’ under the traditional explanation because they are action verbs used with 에. However after understanding 에 refers to a spot, then we know why these particular activities are different.
벽에 못을 박았어요. Put a nail into the wall. The nail goes into the wall at a spot.
여기에 줄을 서세요. Please stand here in a line. A person stands at a spot.
침대에 누워 있어요. Lying on the bed. The contact point between the person and the bed is a spot.

When it comes to the verb 살다:
일본에서 살아요. When we refer to Japan as a space, we perform the ‘living activity’ in Japan.
일본에 살아요. I live in Japan (as a spot). This puts less emphasis on ‘living’ as an activity and the ‘살다’ here has a connotation of ‘present / exist’ somewhat.

However, if we say 일본에서 어린 시절 보냈어요. I spent my childhood in Japan. We must use 에서. You can probably figure out why from the explanations above. 😉

When watching your favourite drama are listening to K pop songs do you realise that sometimes Korean words are pronounced quite differently from the spelling? This is because there are…
BeginnerGrammar